Sunbury dates back to 1772 and was named for an English Village near London, England.

Sunbury has a rich and wonderful history, which is worth seeing in person.  Although our city has grown and changed over the years, we have endevored to keep our historical treasures untouched and alive.

Our sense of the value of these sites is one more reason to visit or live in Sunbury.  If you’re tired of “big city” living, consider this... the biggest traffic jam you’ll encounter in Sunbury is after the high school’s football game!

But it wasn't until the Wizard of Menlo Park came to town, that Sunbury truly became a historic site. Sunbury became internationally famous when in 1883 Thomas Edison demonstrated his invention, the electric light, by wiring the city hotel. The hotel, which was the first building to use Edison's three wire system, changed the world and was renamed "The Edison Hotel" to honor the inventor. 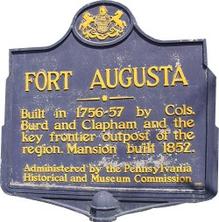 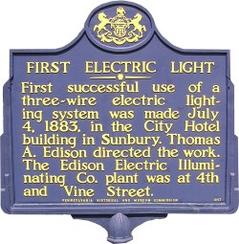 Because of its strategic point along the Susquehanna, Sunbury became the site of one of the most important frontier forts in Pennsylvania, Fort Augusta. Ft. Augusta was a reliable stronghold during the days of the French and Indian War. It also played a major role in the Revolutionary War where it served as the military headquarters for the American Forces in the Upper Susquehanna Valley.