After meeting with the Native Americans, the Governor dispatched Colonel William Clapman with 400 men to erect Fort Augusta. By winter of that same year the fort was able to resist an attack. The following year Colonel James Burd completed additional fortifications.
The existence of the fort discouraged the French raids and the area enjoyed a period of peace. The fort then played a major role in the Revolutionary War. It became the military headquarters of the American Forces of the Upper Susquehanna Valley. As many as 1000 men were assembled at Fort Augusta.

The Commandant of the fort was Colonel Sam Hunter. He lived at the fort and supervised the sending of troops to serve in Washington's Army. Hunter also provided protection and support to smaller forts in the area.

Fort Augusta eventually became the property of Colonel Hunter and his descendants lived ther until 1848 when the log home burned. Please go to Hunter Museum for more details.

The gentle beauty of the Susquehanna River flows along the western edge of the city. The river has provided prosperity and recreation to the Sunbury area for many years. The village of Shamokin, with about ten Native American dwellings, was located along the water. This village became the site of Fort Augusta.

As the Revolutinary War progressed, the Iroquois became allies of the British and frequently invaded the area. 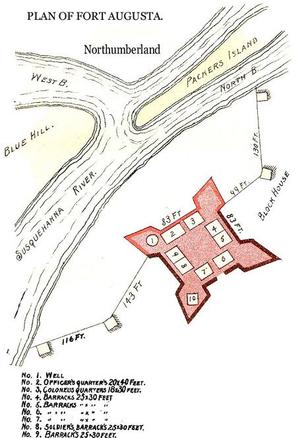